That’s not nearly as carnal or creepy as it sounds.

In more agreeable language it means I’m a man in my 60’s who has been happily obsessed with horror flicks ever since I learned to be afraid of the dark.

You might say my fascination with horror movies is genetic. My mother loved telling stories about how much fun it was going to see all the classic scary movies in the 1930’s, movies like DRACULA, FRANKENSTEIN and THE MUMMY. 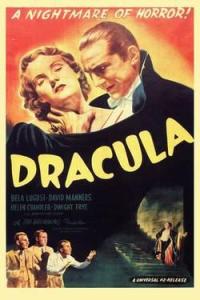 Her eyes would light up with delight when she remembered walking home in the dark streets of the city she grew up in, expecting Boris Karloff or Bela Lugosi to be coming around the next corner, prompting her to run rather than walk. She made being scared sound like it was the most fun thing in the world. Her enthusiasm for horror became a family activity in the 1950’s as we went to see films like HOUSE ON HAUNTED HILL (1958), THE BAT and THE TINGLER (both 1959).

I was all of seven years old in 1958 and watching those movies must have rearranged something in my brain, because in no time at all, I was hooked.

Seeing THE TINGLER during its first run in theaters was a memorable experience. William Castle, the film’s producer and director, was the king of “gimmick cinema”, a genre he practically invented all by himself. Castle found ingenious, entertaining ways to involve the audiences watching his pictures. For HOUSE ON HAUNTED HILL he equipped some theaters with a stunt called “Emergo”, which consisted of a plastic skeleton attached to a wire that went from the screen to the back of the theater. During a key scene in the movie the skeleton would be sent along the wire, flying over the heads of a screaming (and possibly laughing) crowd.

For THE TINGLER he went for a more visceral reaction. At some theaters electric wires were attached to selected seats. During a climactic scene these seats would be given a mild electric shock, scaring the wits out of the lucky patrons. This cool idea was called “Percepto”. Most of these gimmicks were probably done in Hollywood and some large cities. It is highly unlikely that those of us going to movies in fly-over country (Danville, Illinois in my case) would have the opportunity to get wired up with Percepto. But my mother swore up and down that her seat at the Fischer Theater was indeed connected to the Percepto grid. Who knows? Maybe she was right. Or maybe she was just “wired” all by herself. Whatever the case, she loved it! 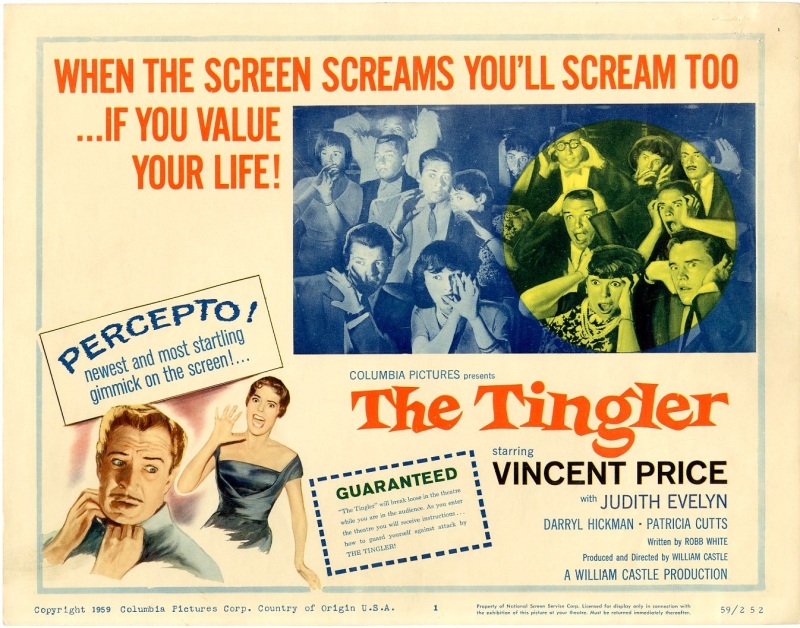 While all of this glorious mayhem was going on in theaters, television was beginning to show old horror and science fiction movies, everything from the Universal classics to the not-so-classic B movies made at studios like Monogram. Most of these were shown late at nigh on Friday or Saturday. Some of these shows featured a new kind of TV star, the “horror host”, who would dress up in a creepy costume to introduce the movie and perform comedy skits that added to the fun. One of these shows was called Terror Theater, originating from Channel 10 in Terre Haute, Indiana. Back in those days before cable television we were only able to get this particular channel when the wind was blowing in the right direction. One night, probably in 1959 or 1960, when my sister and I had just gone to bed, our mother asked us if we wanted to get up and watch a scary movie, SON OF DRACULA (1943). Was she kidding? Of course we did!! We both made it to the living room to watch the opening credits unfold on our black & white 21 inch console TV. I will never forget the first time I saw the Universal Pictures logo for the first time, that swirling, sparkling globe, accompanied by the soon to be familiar music. It’s a Universal Picture! When the logo faded, the screen was filled with cobwebs. Then a pair of withered hands appeared, wiping the cobwebs away, showing the title of the picture. I will never, ever, forget the chill that went down my spine when I saw those hands. Even though I’ve seen SON OF DRACULA  many times I still get the same thrill when the opening credits appear.

This was when my fascination with all things horror truly began. From 1962-1965 there was a late night horror movie show called Way Out that came on every Thursday. It featured a cool host named Trebor. (Robert spelled backwards. I didn’t learn until just a few years ago that the man’s name was Robert Shive, a young guy who was employed by the TV station.)

Robert Shive as “Trebor”, the host of WAY OUT on WCIA-TV in Champaign, Illinois. The horror/science fiction movie anthology played on Thursday night from 1962-65.

Of course, this was a school night and I had no business staying up that late. But my mother knew how much it meant to me to get the chance to see these old movies, so she allowed me to stay up. Way Out was a godsend for this fledgling horror fan. It showed practically every one of the classic monster and sci-fi movies from the 1930’s until well into the 1950’s. So not only did I get an education into the history of Dracula and The Wolf Man, but I also got to see movies as diverse as THE DAY THE EARTH STOOD STILL (1951) and FRANKENSTEIN’S DAUGHTER (1958). I soon began to see the differences between the older Universal classics and the films released by other studios. And I loved them all.

This was a golden time in history to be a horror movie fan. Actors now known as legends, such as Boris Karloff, Vincent Price, Peter Cushing and Christopher Lee, were all alive and well and and turning out quality films at studios like American-International Pictures and Hammer Films. While I didn’t get to see all of these films during their first runs in theaters, I was often able to catch them when they were re-released. But most of them I saw on television during the late 1960’s and all through the 1970’s. One movie I was able to see in the theater in 1961 was THE INNOCENTS, starring Deborah Kerr, a movie now considered to be one of the greatest ghost stories ever put on film. Even at the tender age of ten I was able to sense the psychological weirdness of this very adult film.

Movies like this were supposedly not intended to be seen by children, but we managed to get in anyway. Apparently, someone wasn’t paying close enough attention. And for that I offer up my eternal thanks to the gods of horror movies, whoever, or whatever, they happen to be!

Another movie that came out in 1961, that I didn’t get to see, was something called BLACK SUNDAY. But my sister, who was three years older than me, did see it along with a group of friends. When she came home she was so shaken up by the movie that she stood in the kitchen telling the entire story to my mother, who was also standing up and listening with unbridled delight. I was listening from the next room as my sister described the beautiful, scary witch with the long black hair and strange, piercing eyes, and how evil she was.

When I soon began reading monster magazines like Famous Monsters of Filmland and Castle of Frankenstein, I discovered that this scary lady’s name was Barbara Steele, and that not only did she star in BLACK SUNDAY, but she was also in THE PIT AND THE PENDULUM (1961) with Vincent Price (another movie I had managed to miss!). I didn’t see her on screen until 1964 in CASTLE OF BLOOD, which was on a double bill with HERCULES IN THE HAUNTED WORLD, featuring Christopher Lee. This was a typical Saturday matinee at the Palace Theater in Danville. Fifty cents for two movies and some cartoons. The place was jammed with teenagers and little kids, all talking, some yelling, and most of them throwing popcorn at each other. But I was there with a sense of purpose: to see Barbara Steele. I was focused! When she first appeared on screen in CASTLE OF BLOOD, it was a closeup of her face in all of its black & white Gothic glory. I was mesmerized by this incredible actress, and still am to this day. All these decades later, Miss Steele, now 79, is the last remaining horror star from that wonderful era of the 1960’s.

In my late teens and into my twenties, my fascination with horror films subsided quite a bit. I eventually threw out all the monster magazines and went to see fewer new horror films as they became more concentrated on violence and gore rather than the Gothic atmosphere I always loved while growing up. It wasn’t until the age of home video that my old enthusiasm began to return. I started collecting many of my old favorite films on video cassette and falling in love with them all over again. And with the advent of the DVD/Blu-ray era, I became a dedicated collector. I hadn’t seen some of the Universal monster movies since my ancient Way Out days, and now I was able to study them and appreciate them as an adult. In remastered, commercial free condition! And, yes, I started buying monster mags again. Not only some of the old ones available on Ebay, but the new generation: Scary Monsters, Filmfax and Monster Bash.

In 2011 I attended my first Horror Hound convention in Indianapolis. My mission? To meet Barbara Steele. I was able to sit down with this marvelous woman for a few minutes and chat with her while she autographed a photo for me. “To Michael….” Then she drew a little heart symbol on the photo and gave me a warm, friendly smile.

I gazed into her beautiful green eyes and was mesmerized once again. It was just like being transported back to the Palace Theater in 1964.

On The Subject of Horror

Movie Reviews from the Dark

The Magnificent World Of Dave K

Comments, articles and reviews on Film, TV and Music by Shane Brown

*Comes with reviews, personal thoughts on film and extra sauce all wrapped up in a sesame seed bun.

A daily selection of the best content published on WordPress, collected for you by humans who love to read.

The Art and Craft of Blogging

The latest news on WordPress.com and the WordPress community.